During the Islamic Medieval period (10th- 13th century AD), Puig des Molins Necropolis area was given a different use, being the presence of an Islamic settlement one of the best documented ones.

Since archaeological campaigns started in the necropolis, the existence of Islamic materials inside the hypogea was clear, which attributed to the search for valuables inside the tombs. Furthermore, some of these hypogea were used as dumps.

However, in the 1982-83 campaigns in the north-eastern sector, new building remains belonging to this period were discovered. They were identified as part of a storage unit, a waterwheel and a house, that were considered as part of a rural settlement. Similar constructive elements were also unearthed in the surrounding area: a rectangular building in the intersection between Joan Planells and vía Romana streets, and two waterwheel shafts, one in León street and the other in España avenue. The latest excavations in sa Capelleta neighbourhood, have brought to light the remains of a street from the Islamic period, with houses on both sides. This points towards the existence of a quarter outside madina Yabisâ, which is already mentioned in the Liber Maiolichinus de Gestas Pisanorum Illustribus, that talks about the Pisan-Catalan crusade against the islands in 1115.

Remains unearthed during the 1982-1983 campaigns in the necropolis.

In addition, a great number of Islamic burials were discovered after the excavations carried out in the north-eastern sector. Although, at first, it was believed that it was the cemetery belonging to the north-eastern part of the settlement, now, the better accepted hypothesis is that it could be one of the urban cemeteries existing outside the “madina” walls, as the one excavated in “el Soto”.

According to Islamic funerary rituals, the bodies were found lying on their right side inside a simple excavated pit, which were aligned in rows. The tombs were oriented north-east/ south-west, with the body facing the city of Mecca. As usual, none of the tombs have any grave goods, so giving a precise dating is more difficult.

Image of a funerary tombstone from the Almoravid period.

The existence of a funerary tombstone from the Almoravid period, found at the beginning of the 20th century in unknown circumstances, suggests that it may be related to these other graves, which would allow to give a clear date to some of them between 1115-1188. However, it seems reasonable that the time when this cemetery was used is the same as the buildings area from the north-east sector, which would span from the end of the Caliphate or beginning of the taifas period, until the Catalan conquest in 1235. 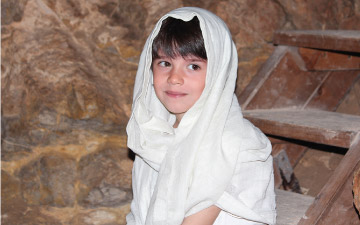 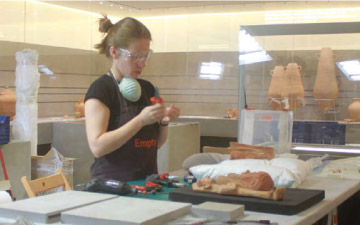 Your ticket for the: Andalusian quarter