Puig des Molins was the cemetery of the city of Ibiza during Ancient times. It is located 500 m south of Puig de Vila, where the city was located since its foundation in the 7th century BC.

Puig des Molins hill was part of a small mountain massif, composed of a small depression with three elevations. The name Puig des Molins comes from the existence of windmills since at least the 14th century (being “molins” the Catalan word for mills), which are now in disuse.

The lower part of this slope was the place chosen by the Phoenicians, founders of the city in the middle of the 7th century BC, to establish their cemetery. The original cemetery covered an area of 10000 m2. Since then and through the Ancient times, it was the necropolis of the city. As with all Phoenician cities, the space between the living and the dead was small, though both were clearly separated by a geographical feature; in this case a small thalweg, which currently matches Joan Xicó, Tanit and Joan Planells streets.

In Punic times, from late 6th to the middle of the 4th century, the cemetery grew considerably, due to the city’s development, reaching more than 5 Has. Graves were distributed along the northern slope, from the summit which is the cemetery’s ancient physical limit, to the plain located at the bottom. It is here where we could find a small number of artisan workshops that manufactured pottery. Once these manufacturing activities ceased to exist, it became an extension of the necropolis until Late Antiquity. In Roman times (1st-5th century AD), the burial area expanded to the current España avenue and even Aragón street during Late Antiquity (6th and 7th century AD).

One of the most characteristic elements of the necropolis is its hypogea, which consists of a rectangular access shaft and an underground chamber, generally square-shaped.

In modern and contemporary times, most of these shafts were used by peasants to plant fruit trees, mostly olive trees, that have given it its remarkable aspect. Due to sediments and vegetation that cover the area, we can only see between 350-400 hypogea from the outside. However, thanks to density samplings that have been carried out in different sectors, the total estimated number is around 3000, not counting other typologies.

Nowadays, due to the cease in agricultural activities, all the site’s surface is covered with sediment layers and a thick wild vegetation that hides most of them. With the exception of es Porxet peasant farmhouse, the only elements that cover the original site are some walls made of stones built in the 19th century, made to create terraces for agriculture, that were destroyed at the beginning of the 20th century during the big archaeological campaigns that took place. We can also find some munitions dumps, a sentry box and some remains of a staircase and other military structures.

The fast growth of the city during the 60s, 70s and first half of the 80s from this past century, as well as the site’s protection -though partial and insufficient- allowed this area to remain as a green urban space, free from any new construction.

It is important to know that since Ancient times until the 20th century, many of these hypogea were looted by “tomb raiders” and “treasure hunters”. We can see the evidence of these actions from the holes they left in the side walls of many of these chambers in order to access the next ones. Today, these alterations are considered to have a high historical value, since they are proof of other human actions being carried at in the site.

All in all, we can say that Puig des Molins is not just the most important ancient necropolis on the island, but also the place that has provided the largest and most varied collection of materials. This has made it the most important archaeological site in the Pytiusic islands and an essential landmark for researchers that will allow a reconstruction of the history of the city and the island during ancient times.

In addition to this, its 5 hectares of original surface preserved, make it the most important Punic necropolis existing in the Mediterranean. Therefore it was included in the UNESCO World Heritage List, “Ibiza Biodiversity and Culture” 1999. 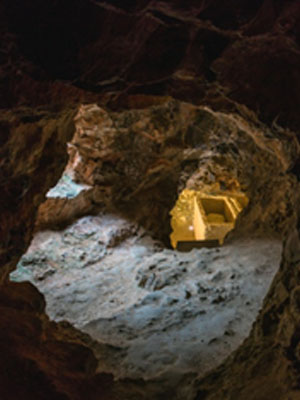 Your ticket for the: Puig des Molins’ Necropolis history